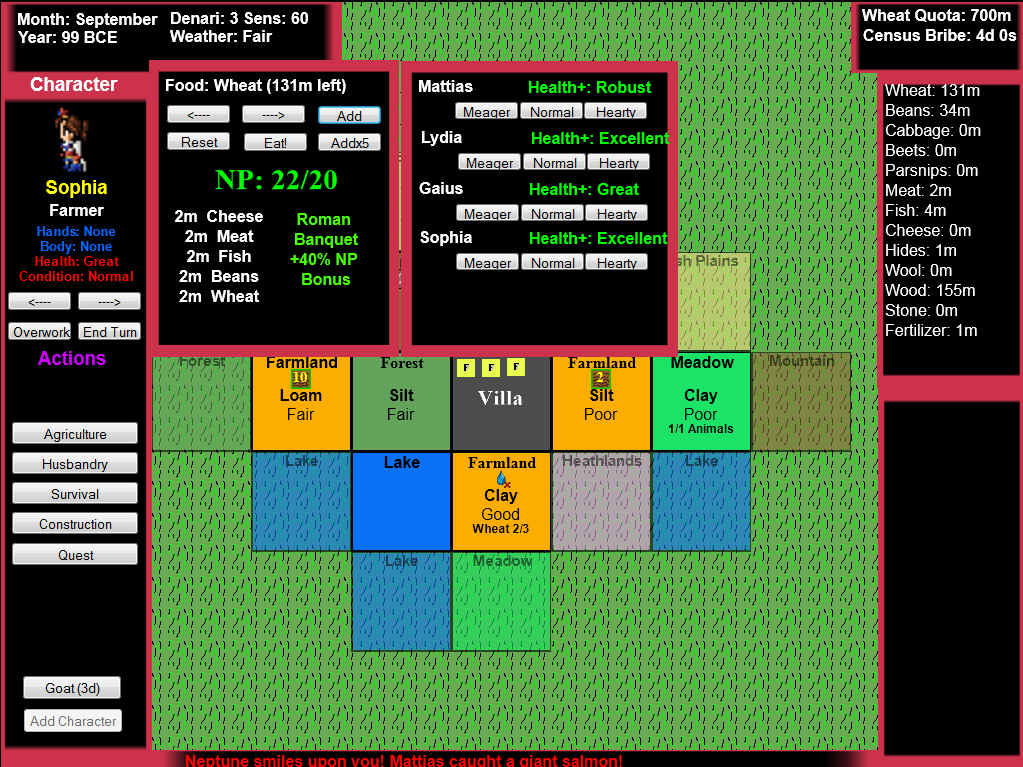 I'm happy to report progress has been steady.   We recently put out some systems we want to have in place before the end of Q1 in the forum which I feel bear repeating on the blog.

Classes/Skills - Boy do we have lots in store for you here... A total of 9 classes, each with 15skills. Each class is centered around the use of a particular skill type, like Survival, Agriculture, or Combat. Initially, they receive a bonus action point towards skills of their type, meaning Rangers can perform extra Survival actions each turn or Witches can perfrom extra Magic actions. Later on, they will have the ability to choose from a small selection of special action types that give them something cool to do each round. The Agent can learn to take the Craft Poison espionage action, the Healer can learn to take the Tend Wounds action, etc.etc. Each time you level you can improve an existing skill or learn a new one from your class. Agronomists make farming a breeze; Ranchers make animal keeping a much more profitable affair. However you play, your characters will evolve in that direction and provide you with new jumping off points for strategies.

Combat - Originally we hadn't conceived a combat system for this game, but it became clear combat would become a neccessary component of owning land out in the ancient boonies. (Rome's empire is only in its infancy as the Republic is falling.) Right now the combat itself should be automated but your strategic choices beforehand greatly influence your success. Wounded characters won't be able to work.

Events/Quests - Bad weather, market spikes, plagues and pests can befall you (and occasionally helpful weather or demand for your crops). You can also embark on month-long quests where your characters roll for success or failure based on the relevant skill and receive quest rewards, including experience. Quests will be offered by Residents as well as Visitors, and may also be contextual based on intelligence information you have received (for example, if you know Roman Legionary squad is coming to your farm in 2 months, you can undertake espionage quests to delay or prevent that attack).

Towns/Roads - Access to towns can be troublesome. You need to keep the roads clear of bandits if you want to maintain access to towns where you can take your product to market, learn new skills, or find day labor in a pinch. Each town will have a generic type which determines what can be sold and bought there by default. Each town may have one or more permanent Residents as well as a slew of rotating Visitors that travel from town to town throughout the year.

Espionage - The Agent class will allow you to accomplish your objectives with stealth, espionage, bribery, and even assassination. Espionage provides a low-visibility way to influence events without the Rome-enraging slaughter of Legionary soldiers. Trade on the black market, craft poisons, and even influence Roman Law!

Magic - A robust herbal medicine and magic system allows mystically-minded characters to branch into 1 of 3 different magic classes: Witch, Arcanist, or Healer. Each provides a huge variety of supplementary skills to plug holes in your overall strategy - the Witch has a great variety of helpful domestic spells, and is especially adept at gathering magic reagents and brewing potions from them. The Healer focuses on keeping your workers healthy and productive, as well as providing religious bonuses useful for feast and festival events. The Arcanist has a wide variety of abilities, from stunning enemies in combat to enchanting items, and has the best ability to see the future of any of the classes, providing s/he has the spell reagents.

Customizable Villa - Add rooms to support more workers, crafting workshops, ore smelters, storehouse space and more. Fortifcations, kitchen, and heating upgrades will also be available to make more efficient use of your food and wood. Your max Villa size and types of buildings will also expand as you get further in the game.

So far the experience of designing, implementing, playing, fixing, replaying, redesigning etc., has been nothing short of awesome.  I can't deny i'm having a blast working on this game and it's clear Chris is as well.

We might be on to something here... And once we get an artist aboard to help us realize this vision we could be making games for a living in no time.

Oops, you forgot something.

The words you entered did not match the given text. Please try again.