Chris has been busting his hump developing the prototype and we've been enjoying the playtesting so far.  I have to say Construct 2 has served us well. It might be a little clunky/inelegant at times, but for quickly putting your ideas to work, you can pretty much do anything without having to do any real coding.  Still takes a good logician though!

As I said, i'm trying to be more forthcoming with Screenshots, so here you are: 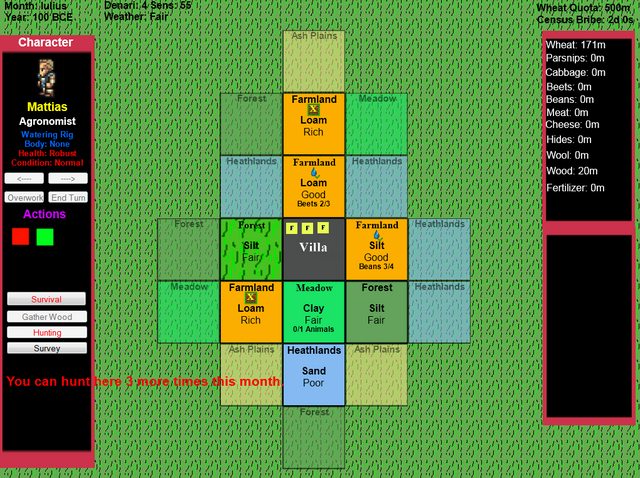 FreeHolder Prototype (1/24/13) - Super-ultra-mega-pre-alpha - Note: Cursor not visible, but currently over 'Forest' tile, getting ready to hunt.

Everytime we bring another system into the game it changes the difficulty of the game, and we need to balance accordingly.   While we're still working on implementing the core mechanics of the game we've been discussing an idea for a long-term meta game within FreeHolder.

We decided the players should be presented regularly with moral decisions in this game, and as such, the players actions will place them on a 2-dimensional scale of Good/Evil and Lawful/Chaotic (Using D&D terminology right now, these might change).  Where you fall on this scale would have a hand in your reputation, which may alter the events that befall you.

Several years into a game we expect the player to get pretty sick of having to pay off the Roman Census to keep them from returning you and your fellow escapees to your previous Master.  But maybe you're just plain sick of the man and you're not going to take it anymore!  So the player is given a choice:

The ramifications as well as rewards will of course be significant.  Taking the chaotic path may require some extra effort training up combat for your characters to protect your land.  But with the extra money you save not having to bribe officials, you might find that you'll have the money to purchase your freedom sooner.  But don't expect the killing of corrupt census takers to go over well with Rome...

Slaves were an essential part of ancient economies, and as deplorable as enslavement is, it can be difficult to argue with free labor from management's point of view.  Considering the player's initial legal status as an escaped slave they may be more inclined to free any slaves they come in contact with.  Or on the other hand, maybe now that the tables have finally turned you want a chance to reap that sweet sweet free labor on your newly held land.  Well we're considering this as an option.  A slaver caravan approaches your land.  You're presented with a choice (providing you have the money).

Bringing in legal status for all characters won't be too difficult, since its the players mission to buy their own freedom from the get go, but we'll have to make a distinction between slave labor and freeman labor.  I'm thinking freepeople who work on the farm take some form of pay along side their food, whereas slaves need only be housed and fed.

These are just a few ideas we have in the works.  And these sorts of things are a long way off from being implmented, but I'm curious what people think about  having these sorts of decisions in a game.  Feel free to comment and offer your thoughts.

Oops, you forgot something.

The words you entered did not match the given text. Please try again.

Club Sauce says...
Slaves are a must. I don't know why, but I'm pretty sure I have made that clear already.

You did indeed. We've decided the scales will probably be more along the lines of Citizen/Outlaw (lawful/chatoic) and Liberator/Slave-Driver (Good/Evil). Each will present their own rewards and perks.

We're also trying to figure out how to differentiate slaves from freeman as characters on your farm. Chris is toying with an experience bonus for freemen, where as I was thinking free people might be paid wages as well as their food and housing. This stuff is a ways off from implementation. I'm not sure we'll be adding it before the end of Q1, but we'll just have to see how we progress.