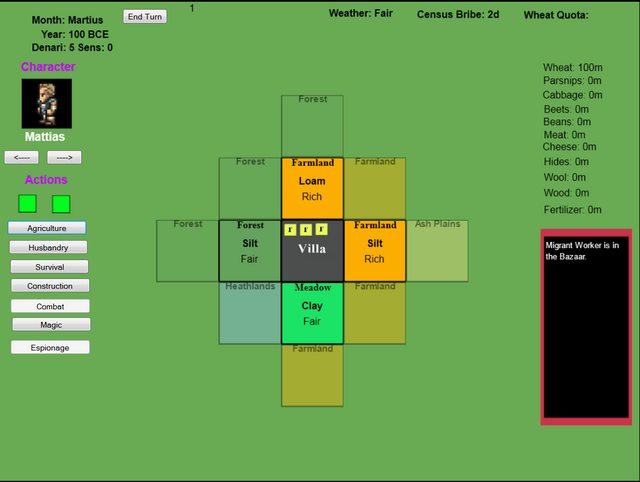 The thing about making a game, is that you must constantly be willing to throw away old ideas for new ones.  Iterative design requires constant reinvention, because any game more complex than pong will have all sorts of unexpected results as new rules are introduced.  The numerous interal systems are constantly at odds, and a designer's goal is to make sure that every rule manages to enhance the fun of a game, without messing up all of the other finely tuned systems already in place.

On that note, Chris and I essentially reinvented FreeHolder over the weekend.  Where we once had an 'LP' system (Labor Points) to give players control over the entire workforce at once, we're now introducing a whole new system of characters, classes, skillsets and items.  So instead of farmers actions being pooled into LP, now each character will be selected and commanded individually.  With this change we've had to rework the feeding system as well as I wrote about a bit in the forums.

Much more to come as we rework these changes into the protoype.  I'm going to try and be more forthcoming with screenshots and hopefully offer some sort of time-window on a playable release.  Once we have all of these new ideas in place, we'll want to see what you think!

So it's about time we unveiled the seeds of our first project to you. It was inspired partly by Agricola, the farming strategy board game. Some of our basic mechanics are the basic mechanics of such a game, known as a "worker-placement" game. It is played in a series of rounds - each round you can assign an action to one farmer, they all take the action, then it cycles to a new round. Such is also the base mechanic of Freeholder, although it's a little more abstract.

Freeholder is our first attempt to synthesize an already-popular genre with a bevy of roguelike twists to bring back the challenge and fun. We all know the massive influx of so-called "farming games" for smartphones and what have you. There's not really any challenge - you plant some crops and wait for them to grow - then you sell them and buy more crops with the money. Do it enough and you level and can buy more stuff, new seeds, etc. There's no challenge as such - and if you want to hurry you can of course buy some sort of currency that lets you do so. That's about it.

I would call that a virtual customizable world, not a game. But a game is what we want.

So let's condense that farming experience down to a series of one-off turns. Assign your labor, take a turn. Assign your labor, take a turn. But rather than some vague goal of making your farm "better" than the other people that started playing before you (impossible without money or scads of time) let;s make the very survival of your farm based on the efficacy of your farming - you farm smart, you use proper agricultural skills, strategy, and planning, and you might make it from one year to the next. The source of this mechanic is two (or three) fold.

Two, you must hit a wheat quota every year. I'll go into the backstory presently but suffice to say you must hit this wheat quota and it goes up each year. Fail to hit this quota, and it's game over (generally, although with great planning and luck you might be able to circumvent this, more later). Three, you must supply a bribe to some people who would put a halt to your farming.

So, each year you must feed your workforce, as well as come up with enough wheat to hit the quota and make enough money from selling (and other sources) to pay for a bribe. Now, your farming ability has real implications for your game, and the end of the game is always just one year away.

Of course, roguelike elements demand a high degree of randomness. Good weather may propel you far into the game, or a drought may tank your chances just when you thought you had everything under control. A great visitor may stop on your farm to give you aid, or the barbarian hordes may overrun your farm if the situation becomes dire enough. All you have from game to game is what you learned from the last one. This is a roguelike. This is a game of games. A meta-game.

It doesn't stop there, though. Conquer that mechanic and the game opens up to a world where anything is possible - political influence, espionage, magic, and more. The ultimate aim of the game? That's up to you. There are several paths to "victory" all of them attainable with enough practice and just a touch of luck.

I'm excited to share more details of this project in the coming days, weeks, and months. We've been assembling a rough prototype in Construct 2 and we may soon be willing to share it, once a few more basic mechanics are implemented more fully.